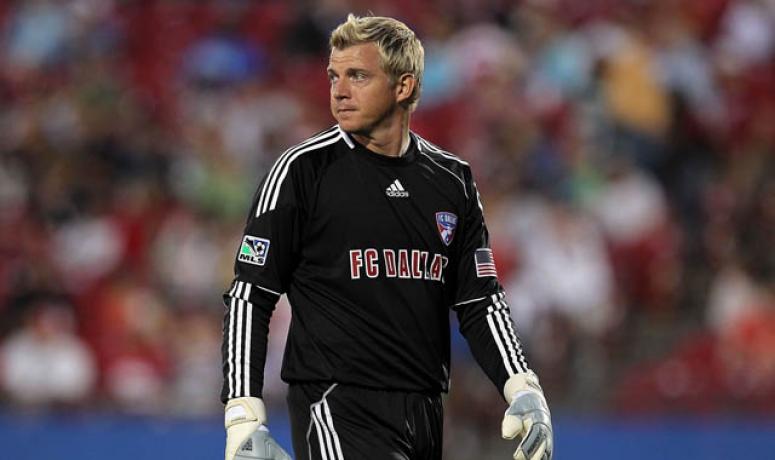 PGK: What was your path into the pro game and to your first team debut?
Kevin: I grew up in Southwestern Virginia playing soccer with friends at a fairly low level competitively. I loved the game and spent endless hours playing with anyone I came across, including the Division I players at the local university. My family moved to Southern California in 1990 and the level of soccer that was exposed to increased dramatically. I played for a couple of years at Cal State Dominguez Hills, a Division II program in Carson, California. From there, I transferred into UCLA and played three years before being drafted by the Los Angeles Galaxy of Major League Soccer. I was so excited to get my first team debut against Aston Villa of the English Premiership and started my first league match on my birthday, May 25, 1997, against the Columbus Crew and fellow UCLA Bruin, Brad Friedel.

PGK: What was the hardest transition from the college game to the pro game?
Kevin: In college it was easy getting by on athleticism. Once I entered the professional game, it was no longer enough. It was crucial for me to develop an understanding of how defenses worked so that I could communicate more effectively with the group in front of me. The professional game is so much faster than the college game, it was critical for me to be able to understand what strikers were capable of and how best to deal with scenarios that occurred on a regular occasion.

PGK: With over 400 appearances in the MLS what keeps you motivated to compete at the pro level?
Kevin: I’ve loved the game of soccer since I was a young kid. The joy that I get from playing is unmatched. Being a goalkeeper is no easy job and the pressure associated with being a top level player for your club would be overwhelming unless there is a true passion for the game and a desire to prove yourself on a daily and weekly basis.

PGK: What is the hardest situation you have had to deal with in your pro career?
Kevin: I conceded a goal in MLS Cup 1999 after being named Goalkeeper of the Year that was a huge contributing factor to us losing. Although the score was 1­-0, we had a great team and were more than capable of coming back. Unfortunately, I misplayed a back pass which made the game 2-­0 and really sank our hopes. A mentor after the game told me that I could allow that to be how my career would be defined or that I could make it a footnote. Those were some of the best words that I’ve ever heard. By framing the situation in the right light, I had the ability to change how something in the past was perceived.

PGK: How do you prepare for a game at 4­4:30 p.m. kickoff? What changes for a 7:30­8 p.m. kickoff?
Kevin: The most difficult thing for me is that I’ve always enjoyed a bit of a midday nap to lay down and envision how I imagine the game going. As the day is shortened, it makes it more difficult to do so, and things sometimes tend to seem a bit rushed. It’s also difficult to get my eating schedule down pat and sometimes I’m forced to wake up earlier than I’d like for early games so that I can space my meals effectively. From a playing perspective, day games and night games present many different factors such as temperature, sun, and moisture. Those all must be taken into account to be successful.

PGK: What is a typical in season training week look like for you when you have one game a week?
Kevin: Game Day (Sat.), Regeneration/Recovery Session (Sun.), Off Day (Mon.), Training on issues that we had during the previous game(Tues.),

PGK: How do you like to analyze a game you have played in? With your GK coach? How long after? How much video?
Kevin: I usually view each game on my own and take a very critical look at important moments in the game. If there are things that I feel that I could have done better, I’ll usually mention those as my goalkeeper coach presents moments that he felt were important Strength/Physical Goalkeeper Training (Wed.), Training to prepare for strengths of the upcoming team (Thurs.), Light pregame session with the team that includes set piece and video preparation (Fri.)

PGK: What is a typical in season training week look like for you when you have two game a week?
Kevin: Game Day (Sat.), Regeneration (Sun.), Revisit the game on the weekend and prepare for strengths of upcoming opponent (Mon.), Light team training with set pieces and video preparation (Tues.), Game Day (Wed.)

PGK: Who is the toughest forward or the best front line you have faced?
Kevin: The best player that I’ve ever had the opportunity to play against was Zinedine Zidane of Real Madrid. At the time, Roberto Carlos was playing for the team and was considered one of the best left sided backs in the world. That being said Roberto Carlos, who was unmarked, would play the ball inside to Zinedine Zidane who was heavily defended because of Zidane’s vision and poise on the ball. It was amazing to see how well that he could evaluate the field and make pinpoint crosses to the likes of Figo and Beckham.

PGK: We know you have started your coaching licenses; will that be a natural progression for you moving forward?
Kevin: I enjoy coaching very much. I’d love to be able to relay the experiences that I’ve had in the game and the lessons that I’ve learned to the next generation of players.

PGK: And if so what level would you want to coach at?
Kevin: I currently have my USSF A License and USSF Goalkeeping License. I am always interested in learning more from top managers, players and coaches and seeing
the game from the other side of the touch line. Managing personalities and being able to give players the tools necessary to compete at the highest level is a complicated task and I look forward to working with clubs and in my own business to expedite players’ growth and to helping them reach their full potential.

PGK: What has been the biggest change in the modern game or training for you over the years?
Kevin: Strength training, nutrition, and sports psychology have become a much bigger part of the game. Also, technology has become instrumental to any top teams success. Whether it is heart rate monitors or video analysis, the ability to get real time feedback can’t be underestimated.

PGK: What do you like to do as a pre­game warm up?
Kevin:I tend to make sure that I’m prepared physically and confident that I’m ready to go. I don’t ever overextend myself in the warm­
up but am always sure to get a few touches in any manner that the ball may come to me in a
moments in the match. Usually, we’ll have similar views and even if we don’t, we’ll work through it and determine the best way forward.

PGK: How much information do you like on your opponent before you play them, both the team and the individual players?
Kevin: I tend to watch a ton of games during the year and have a fairly good idea of player’s strengths and weaknesses that I’ll be facing. I’m always open to additional information as I only believe that it can help in my preparation.

PGK: Any advice for our young up and coming PGK keepers reading this?
Kevin: Goalkeeping is both the most demanding and rewarding position in the sport. Be prepared for the highs and lows and know that you are not alone in your pursuit of success. Every goalkeeper deals with the same issues and we share in each other’s pain. Make sure that you realize that to continue to grow, there will be many moments where you’ll need to be able to pull a lesson out of both great and not so great plays. Constantly watch other’s and learn from their successes and failures as well. Good luck.

PGK: And what about our GK coaches reading this, any advice for them?
Kevin: The relationship between a goalkeeper coach and a goalkeeper is crucial. The coach must constantly be learning and trying to offer new lessons and to keep things fresh. While this does include new exercises, be careful not to change things up too often or the goalkeeper will never feel as comfortable you were hoping. Also, trust is perhaps the most important aspect in a coach/player relationship. Make sure to treat it with the respect that it deserves.

PGK: You played for the full U.S. National Team five times, what are some of the differences from the club game to International game for you?
Kevin: The speed of play is decidedly faster and the weakest players on the field are light years ahead of average players at the club level. Each step that you take upwards in soccer demands better technique, better focus, and an extraordinary level of adaptation.

PGK: What has been the highlight and low point of your career so far?
Kevin: Winning the MLS Cup and U.S. Open Cup in 2005 was the highlight of my career. Making a crucial mistake in the 1999 MLS Cup after being named MLS Goalkeeper of the Year was a definite lowlight.

PGK: Do you have set pre­game meal?
Kevin: I tend to have a protein such as chicken, yam, and some type of mixed vegetables. I also drink a Pedialyte in an effort to be properly hydrated. I’m not sure it works, but it’s a habit now.

Performance Goalkeeping would like to thank Kevin for his time and wish him all the best for the remainder of the season and the future.