Testimonials From The Pros

What some of the top names in soccer have to say about Paul Rogers and PGK.

“Paul Rogers has done a fantastic job of establishing himself as one of the premier experts in goalkeeping. His experience in the men’s and women’s game has seen him working at the highest levels. The success that Paul has had in such pressure filled environments is attributable to both his openness to learning new things and a willingness to work extremely hard. I feel comfortable recommending Paul as a coach, a trainer, and a mentor to players at all levels.
-Kevin Hartman / Former USA National Team Goalkeeper / MLS all time appearance leader and games won by a GK / Current Technical Director at IMG.

“Paul Rogers is by far the best goalkeeper coach I have ever had, I have ever seen or I have ever worked with. Coaches aren’t just great because they know how to coach, it is often because they know how to manage personalities and Paul knows how to manage me; he knows how to manage all of our goalkeepers. At the same time he has the best eye for the most minute details and we do video. He puts in the extra time, effort and work and he is the best goalkeeper coach. I don’t know where I would be without him.”
-Hope Solo / USA National Team Goalkeeper / World Cup winner, Olympic Goal Medalist, Golden Glove winner

“Paul is very attentive to the details. If you come watch our training sessions, your feet your hands your knees your chest your butt, everything is broken down and the smallest margins make the biggest difference. He videotapes everything, then we analyze everything. Not catching a ball clean is not good enough. He brings out a really good quality in all of us. He really focuses on our technique and training us like men. He hits the ball harder than probably most females will ever face and that’s a good thing. He does a great job of preparing us. That will help the team, that has helped me, and that’s what’s been my focus.”
-Ashlyn Harris / USA National Team Goalkeeper 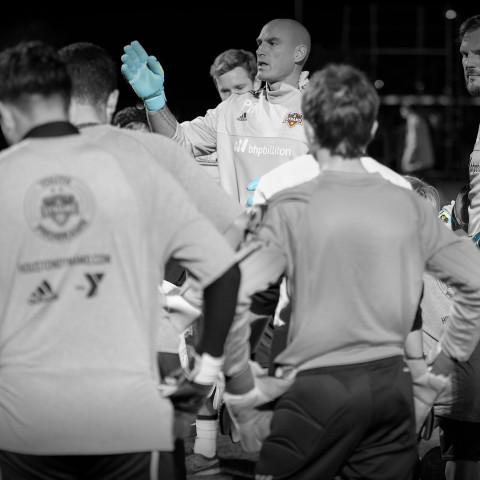 “Having had Paul as one of my assistants for the past 5 years, I would definitely say he one of the best out there.
His knowledge of football and particularly goalkeeping is second to none. Paul is passionate about football and goalkeeping, his attention to detail both on the pitch and off it are world class. His use of video analysis of games and training, his tireless work rate, and dedication to the position and sport is unmatched. You can trust Paul will develop the players he works with every time.”
-Pia Sundhage / Head Coach Swedish Women’s ’National Team. Olympic Gold Medalist in 08 & 12 with the US Women’s National Team

“Paul Rogers has a passion for goalkeeping coaching that is unique and inspiring, his knowledge of the position and his ability to train and develop goalkeepers is special”
-Tony DiCicco / Head Coach US Women’s ’96 Olympic Gold Medal & ’99 World Cup Champions, US U20 World Champions

“Paul is by far one of the most passionate and knowledgeable goalkeeper coaches you will find.  His quality of training and focus on the fine details challenges any level of goalkeeper.  Paul demands a lot of you which makes you demand a lot of yourself.  He pushes you beyond what you think is possible both mentally and physically because he truly understands how to get the most out of you as a player. You pride yourself in working hard each session because he is working just as hard on and off the field. His knowledge of the game and ability to adapt his teaching to stay ahead of the game as it changes over time is impressive. He has an eye for recognizing talent and then the prowess to develop that talent. He trains goalkeepers to reach the next level of their game, and I honestly believe he has done that with me.  I can say that I am a technical goalkeeper thanks to Paul, and that he has helped to improve all aspects of my game, including decision making, positioning and my overall understanding of the tactical side.  He has given me the tools to be confident and prepared every time I step on the field.  I have been fortunate to train under Paul for the last few years, and highly recommend him for anyone looking to reach above and beyond his/her believed maximum potential while developing the true fundamentals of goalkeeping.”
-Nicole Barnhart / USA Women’s National Team Goalkeeper.

“Paul is one of the most intense goalkeeper coaches I have ever trained with. I pride myself in working hard and in the past have often asked for extra sessions, asked to watch video, whatever I could do to improve my game. With Paul I have never had to ask for extra because he works as hard, if not harder, than his keepers. He focuses on technique and small details about set position, balance, and foot quickness, and after just a few weeks I started noticing a huge difference in my game. Along with the technical side of goalkeeping he places equal emphasis on tactics, decision making, and reading the game. He has already made me a more rounded goalkeeper but most importantly he has helped me to be completely confident in what I do. With all the tools he has given me I play every game with the belief that I am the most prepared I can be and, as Paul says it, with a “make them beat you” attitude. Every day Paul challenges all his keepers mentally and physically and constantly pushes us to be better. With Paul as my coach I am making saves I never thought I could make and have played some of the best games in my life.”
-Erin McLeod / Canadian Women’s National Team Goalkeeper.

“Paul is by far one of the greatest goalkeeper coaches out there today. I can say that having had many goalkeeper coaches but few stay up to par with what the game is doing today and Paul has mastered that art. He knows every aspect of the game, the technical, tactical, physical, and the mental aspect of the position. I cannot think of a weak point in his coaching because he is so knowledgeable on all aspects. What separates him is that he knows how to teach it in a way that is challenging to all keepers no matter what level you play at. I have the utmost respect for his as a coach and as a person because he can motivate and challenge you to do more than you ever thought possible. I know that he did that for me.  Whomever has the opportunity to train with Paul should consider themselves fortunate because he truly is different than all other goalkeeper coaches out there today.”
-Karina LeBlanc / Canadian Women’s National Team Goalkeeper.

“Paul Rogers has developed into the premier goalkeeper coach in the US. His passion for the game coupled with his ability to break the game down through on the field training and video analysis make him a unique and exceptional teacher.”
–Mark Krikorian / Head Coach Florida State University

What some of the students have to say about Paul Rogers and PGK.

“This is great training for goalkeepers this my second year with performance goalkeeping, I learn every time I go to Paul Rogers camp. I’m more confident going to the balls and blocking them he teaches goalkeepers to be the best they can be!”
-Kelsey Weber, U-14 Ohio Elite Soccer Club

“Before I met Paul, I didn’t pay as much attention to the the technical aspect of goalkeeping as I have in the last few years since training with him. The knowledge I have gained through Paul is always on mind while training.”
-Paige Brown, U-18 SLSG ECNL Elite / USA Youth National Team Pool / University of Louisville

“Intense…with a capital I! I went to PGK 4 in St. Peters, Missouri and it was the best GK camp I’ve been to. My favorite part of camp was trying to make diving saves with Paul rocketing them at me. I can’t wait to do it again.”
-Alaina Stehlin, U-11, SLSG Metro Blue

“Thanks Paul for giving my daughter the opportunity to work with your team of professionals. Girls need great female athletes to look up to. Jill Loyden is a first class goalkeeper and most importantly a first class role model.”
-Parent, Readington NJ