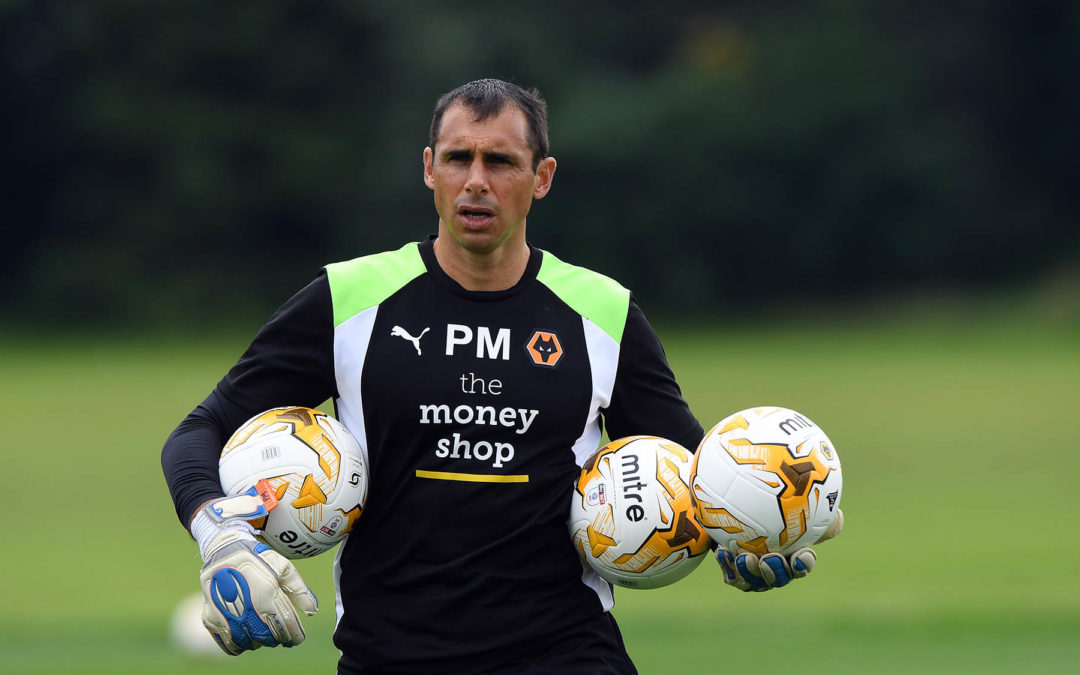 You are the first team GK coach at Wolves now Pat, what was the path you took to get there? As a player in my early twenties, I started to do my coaching qualifications and combined this with regularly coaching young players – both outfield and goalkeepers – as it was something I enjoyed.
At around the age of 22 I was playing semi- professionally and working most days coaching on various community schemes in schools and development programs. I had undergone two major knee operations by the time I was 23 and realized that I was going to progress further as a coach than a player providing I worked to gain the qualifications and experience needed to make my way without a massive playing career behind me, although I did make over 200 games for Newport County at Conference level. At the age of around 24 I had gained my outfield and goalkeeping ‘B’ Licenses and was working with the Welsh F.A. as a Football Development Officer and tutoring at Level 1 and Level 2 outfield and GK Awards. I took both my Outfield (Welsh F.A.) and Goalkeeping (English F.A.) ‘A’ Licenses in 2003/4 and was working with the Wales Under 21’s and Cardiff City’s Academy as the Goalkeeping Coach that season. In October 2005, I had the opportunity to go to League Two side Cheltenham Town on a part time basis and work two mornings a week with the goalkeepers that progressed to two mornings plus matches as the season went on. The following season I continued with Cheltenham, who had now been promoted to League One, and also worked two mornings a week at Hereford, then in League Two. This arrangement continued until the start of the 2008/09 season when the opportunity arose to go and work at Wolves in the Championship on a full-time basis. Fortunately in my first season, we won the Championship and got promoted to the Premier League where we are now into our third successive season.

How many GK’s do you have during a regular week of training?
It is extremely difficult to describe a regular week as there really is no such thing!! Especially in the Premier League where matches are often not taking place at the traditional 3pm Saturday kick off. However, I am responsible for six goalkeepers in total (3 seniors, 1 young professional and 2 youth team). On a daily basis it depends whether the youth team keepers are training with me, whether we have a first team or reserve match that day and also whether any of the keepers are on loan at another club.

Do you get to work with the youth Keepers at Wolves?
Unlike a lot of Premier league clubs the youth team players often have the opportunity to train with the senior players and the goalkeepers are the main beneficiaries of this as they get to train with the senior goalkeepers (and regularly the senior outfield players) at least twice a week. Our Academy goalkeeper coach is part-time and they mainly work with him on a Tuesday and Thursday and me the other training days.

How much time do the pro keepers and the youth keepers spend doing resistance/strength work, and what is the focus pre-season, in-season, and out of season with regards to strength/fitness work?
During the season, the senior goalkeepers’ gym work is based around games and usually involves two sessions a week of 30 to 45 minutes split between upper body and lower body power work.
However, sometimes this is combined to one session, around an hour. During pre-season the goalkeepers join in with the outfield players within their group strength and conditioning sessions and once the season starts they follow their own specific programs. The youth team goalkeepers’ gym programs are taken care of through the Academy sport science department.

What is a general week for the first team GK’s in a 1 game week and a 2 game week? (Days on the training field, in the gym, doing analysis/video/scout reports)
Again, there is no such thing as a regular week but for argument’s sake let’s call it Saturday 3pm to the following Saturday 3pm! The senior goalkeepers would be off on Sunday, and the goalkeeper that has played would do a cool down and some gym work on a Monday with the other goalkeepers training outside. All the goalkeepers would train Tuesday and do gym work after training. Wednesday would be a rest day. Thursday would be a specific training session geared around the opposition along with some video analysis regarding both the opposition and last week’s performance. Friday would be a light training session aimed towards the game the following day.  If the first team is playing Saturday-Tuesday- Saturday, everyone is in on the Sunday – the players that played the day before will do a group warm down and all the other players will train. Everyone will train on the Monday and we’ll do analysis work of the previous game and the next game if appropriate. Usually the players then report for pre-match meal (as we do before every home game) or we always travel the day before an away game and stay overnight. The players do a warm down after the evening match and then have a day off on the Wednesday before the week carries on as normal from Thursday leading up to the Saturday game.

How long do you wait after a game to address match-specific situations with your goalkeeper?
A lot depends on the goalkeeper that is playing and whether you sense they would like to discuss it. Usually, they like to talk about it straight after the game and follow that up in the next training session with a more in-depth discussion after we’ve had an opportunity to watch the game again.

And, how do you follow that up with full analysis for yourself and the GK?
The senior coaching staff at Wolves always watches a full re-run of the previous game on the following working day. Along with our match analyst, I will pull out all the relevant clips from the game to go through with the goalkeeper.
What are the main factors that stick out for you between the level of a Premier league GK and the rest?
For me, speed of thought and speed of movement are the key areas that will determine a top, top goalkeeper. Speed of thought means making the correct decision every time because at this level, if you don’t you will be punished. And that speed of decision has to be made in the full knowledge of the unforgiving nature of the Premier League environment. Speed of movement really means how quickly you can react to a situation and make that first movement. With the top goalkeepers, you don’t really notice it because it looks natural and they do it correctly every single time.

What have been the main changes you have seen in goalkeeping in the last 5 years?
Personally, I have seen a lot of changes because five years ago I was working in League Two, then League One, then the Championship and now the Premier League. So I’ve seen the difference between what is expected and the ability of goalkeepers throughout the whole professional English football structure.

What do you find to e the biggest challenge working with Premier league GK’s?
The quality of the opposition, the speed that things happen on the pitch and the quality of the pitches means the outfield players have the best possible opportunity to trust the surface to do what they want to do with the ball. Also you can face contrasting styles of play in the opposition you face and the constant scrutiny of playing in the most exposed league in the world – in terms of the number of fans and attention of the media who are watching every move and are quick to highlight every mistake and every goal conceded by a keeper.

What would be the one thing you would stress to any up and coming goalkeeper?
First and foremost, enjoy playing in goal. Because I find that these days within the Academy structures there is far too much pressure placed on all players and the fun element can sometimes seem far removed. Secondly, join in the outfield sessions and get comfortable manipulating the ball under pressure, retaining possession and reading the game. Practice using both feet and the variety of your distribution because if you are to progress to the top level this will inevitably be 80 to 90 per cent of your game.

What would be the one thing you would stress to a young GK coach trying to make a mark in the football world?
It may sound like a cliché but take your qualifications and gain as much experience as possible so you learn to walk before you run. I see a lot of coaches taking their qualifications and assuming they should be working above the level that they are. However I would stress that experience is just as vital, no matter at what level that experience is. From my own point of view, I learned a lot from my early days of coaching in terms of learning to control groups of young players, organizing training sessions, learning the importance of being able to think on your feet and all this stands you in good stead as you progress in your coaching career.
Performance Goalkeeping would like to thank Pat for his time and wish him all the best for the remainder of the season with Wolves.